VISIT OF THE AMBASSADOR OF SPAIN TO VI LICEUM 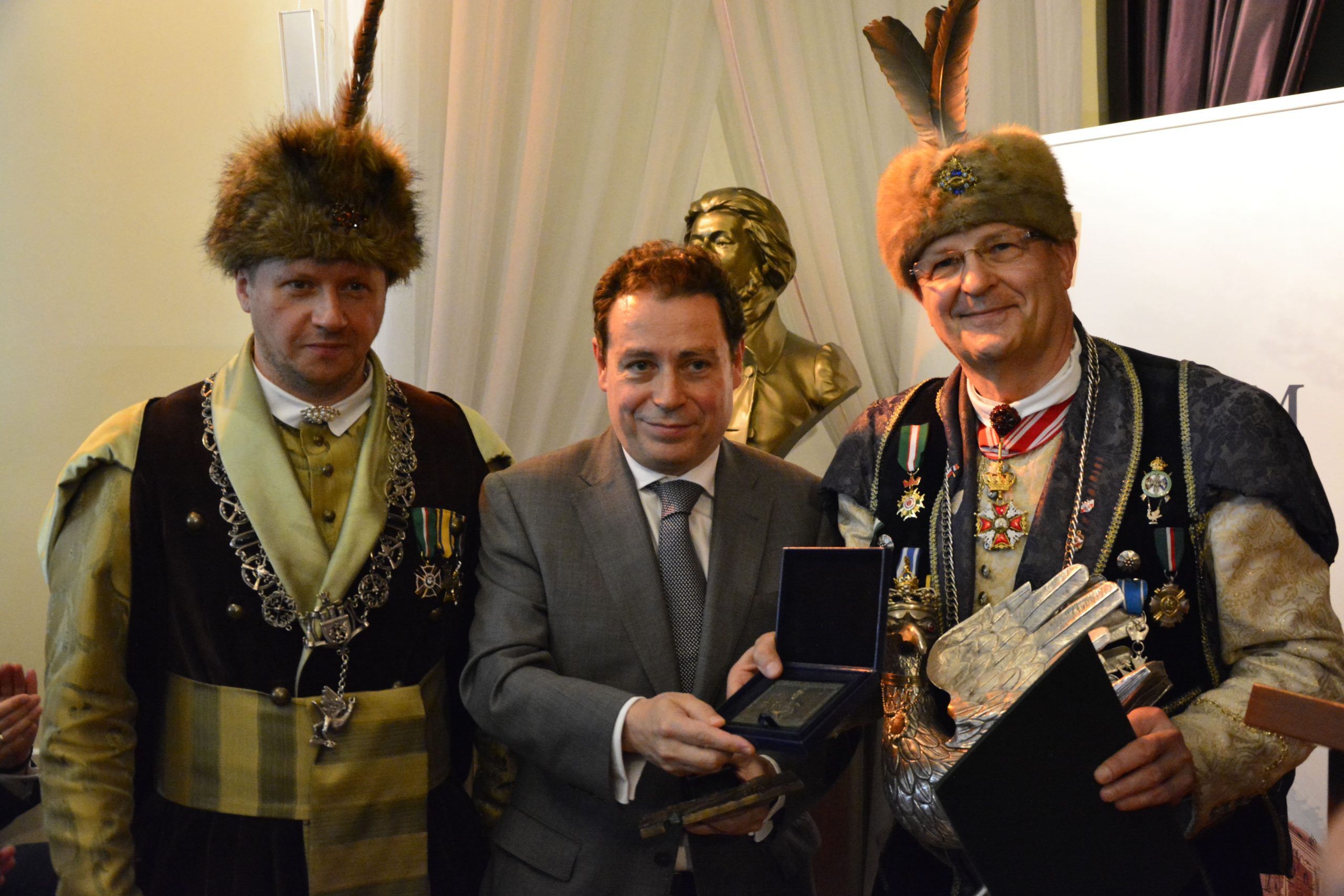 The bilingual section with Spanish at Secondary School No. 6 is celebrating its 20th anniversary.

The culmination of the anniversary of the establishment of the section was on April 25 this year, in which we were honored by the presence of the Spanish Ambassador to Poland, Francisco Javier Sanabria Valderrama. The ceremony was also attended by other distinguished guests, including Dr. Ewa Włodarczyk Director of the Department of Educational Strategy and Vocational Pragmatics at the Board of Education in Krakow, Fernando Martínez-Vara de Rey de Irezábal Director of the Cervantes Institute in Krakow, Judith Gil Clotet Director of Teaching at the Institute Cervantes in Kraków and dr hab. Ewa Nawrocka Head of the Department of Spanish Philology at the Jagiellonian University. Among the other official guests were representatives of the Krakow Brotherhood of Fowl, in the person of the King and Marshal – Piotr Mikosz and Zbigniew Szota – who awarded the title of honorary member of the Brotherhood to the Ambassador of Spain.

The ceremony began with a performance by students of the 1st and 2nd degree music school
them. Bronisław Rutkowski, Małgorzata Bogusz and Danuta Kasperczyk, who performed the works of Boss in re – Jorge Morel and Milonge – Jorge Cardoza. Then he spoke
Czesław Wróbel, PhD, Director of Secondary School No. 6, who warmly welcomed all guests and summarized the activities of the bilingual section with Spanish, pointing to its most important successes, including the title of the best Spanish language school in Poland twice. In his speech, the Ambassador expressed appreciation for the achievements of the Spanish section to date and congratulated the Directorate, Teachers and Students on the 20th anniversary of its existence.

In the official part, diplomas and awards were presented to the winners and finalists of the sixth edition of the competition for junior high school students “Different faces of Spain”, organized by the Board of Education in Krakow and VI Liceum Ogólnokształcące im. Adam Mickiewicz in Krakow under the patronage of the Office of Counselors for Education in Warsaw. Then, the Ambassador congratulated and presented the awards to the best students of our section: Julia Śliwińska, Aleksandra Wajda, Aleksandra Komuda, Katarzyna Borowiec and Iga Walencik.

The artistic part began with a classical dance show by Małgorzata Cierlik “Variation Kitri” from the ballet “Don Quijote”. Then we had the opportunity and undoubted pleasure to see the play “La Bella Dorotea” by Miguel Mihura, awarded second place during the Spanish Theater Festival in Warsaw, performed by students of the bilingual section, who delighted the audience with the level of interpretive skills
and linguistic.

The ceremonial meeting ended with a nice chat with the school’s management and teachers, during which Mr. Czesław Wróbel, Ph.D., Director of Secondary School No. 6 and Mr. Francisco Javier Sanabria Valderrama, Ambassador of Spain
in Poland, they exchanged their impressions and expressed their satisfaction with the cooperation so far, and declared further strengthening of mutual relations between Secondary School No. 6 and the Office of the Counselor for Education at the Spanish Embassy.

The First Lady of the Republic of Poland visits our school

On May 30, 2018, our school hosted the DSD II diploma gala. The guests of honor at the ceremony were Agata Kornhauser-Duda, the wife of the President of the Republic of Poland, Dr. Michael Groß, German Consul General in Krakow and Piotr Michał Mikosz, King of the Fowl AD 2017 “European”, who graduated from this school.

The spouse of the President admitted that, as a teacher of the German language, taking part in the presentation of DSD diplomas, each time she gets a lot of satisfaction from it. She emphasized that the students’ commitment and diligence invested in preparing for the exam can fill them with joy and pride that the First Lady shares. Agata Kornhauser-Duda handed over the diplomas to the ten best students and handed over the special award to the graduate with the highest score. She also encouraged young people to take advantage of the scholarships offered by universities. The meeting was made even more pleasant by the musical performances of this year’s graduates of Secondary School No. 6 in Krakow and the accordion trio from the State Secondary Music School W. Żeleński in Krakow.
It was a great honor for our school to host such outstanding personalities within its walls. 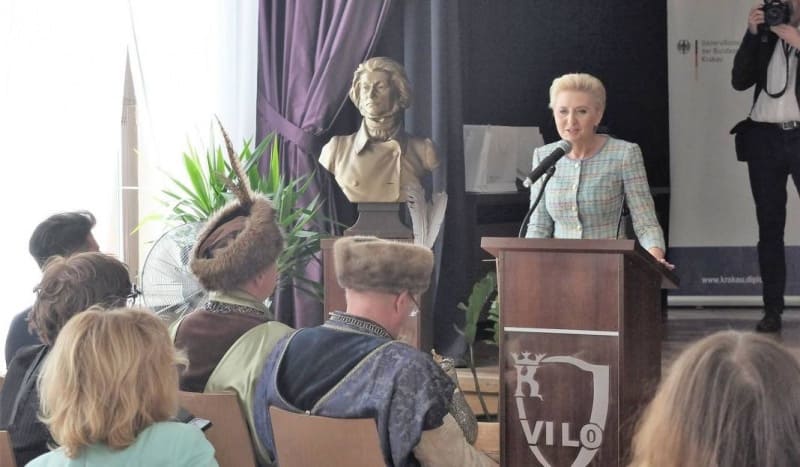 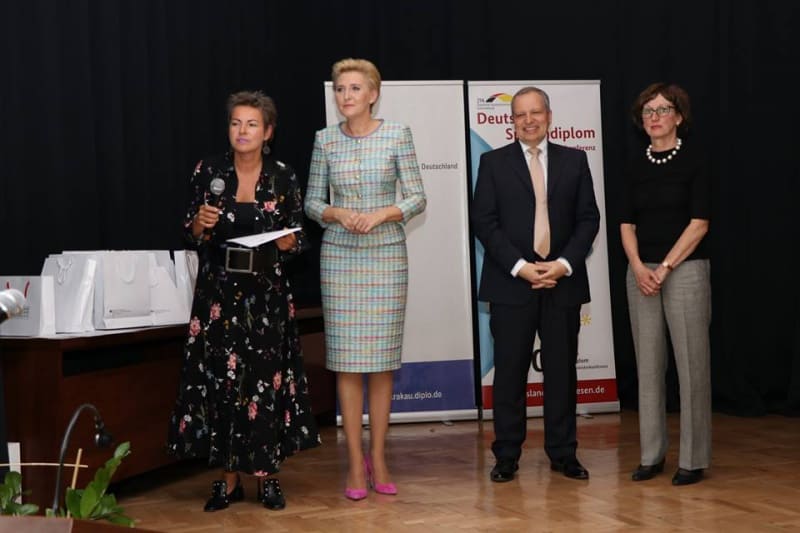 Congratulations to Oliwia and Bartek

Oliwia Krzemień and Bartek Biesiadecki stayed
winners of the Olympiad of Technical Innovation and Invention,
took the third place.

A visit of Le Mans high school students in France

On May 23, 2018, we were visited by a group of middle school students from the city of Le Mans in France, from a school associated with UNESCO. After a short acquaintance, we went on a tour of Kazimierz, and then in the Lyceum Lyceum, first-class students learning French presented the most important advantages and tourist attractions of Krakow: monuments, legends, universities, museums and festivals. The meeting resulted not only in the possibility of conversing in the colloquial version of the French language, but also a mutual declaration of willingness to maintain contacts. 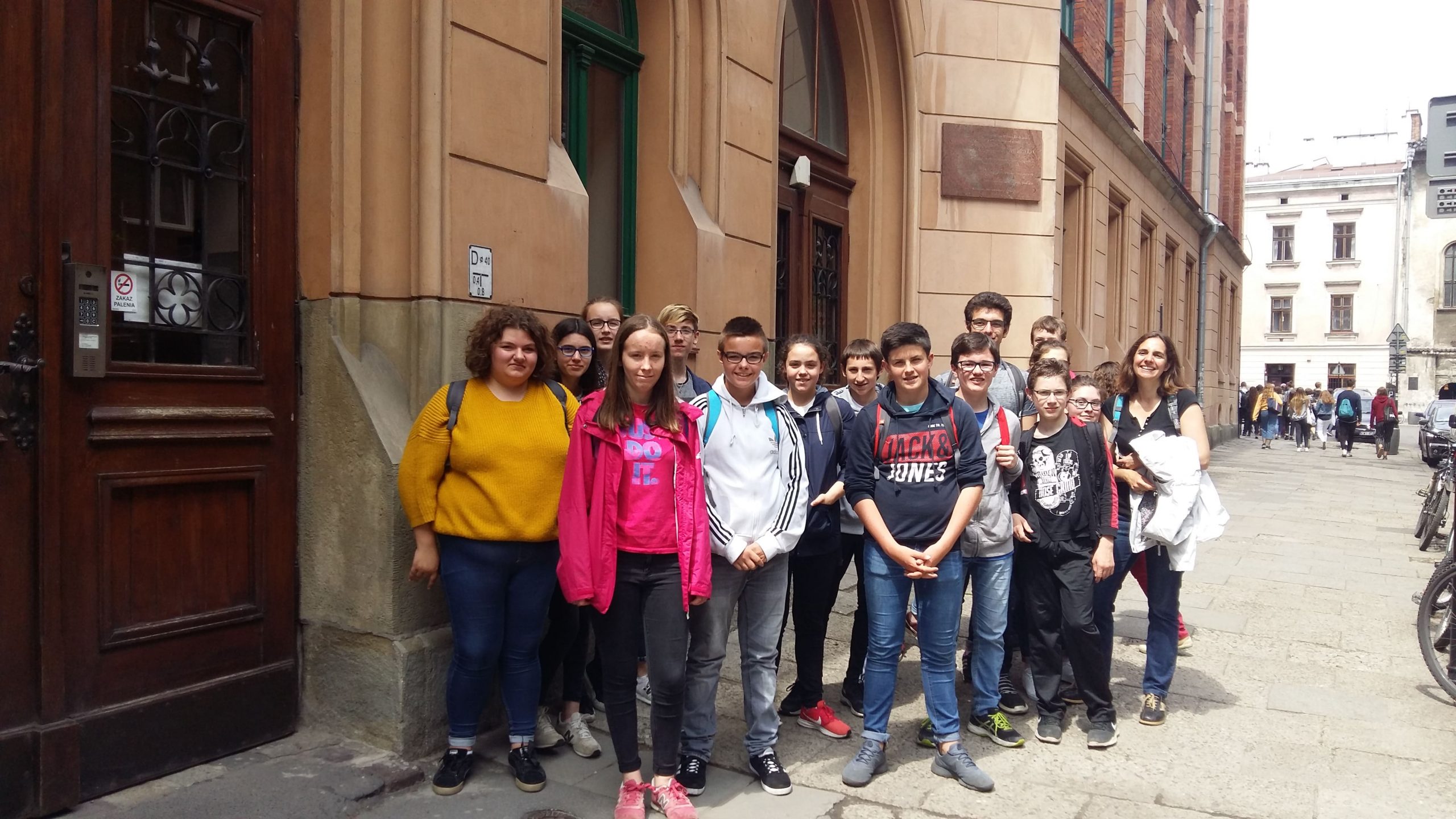 On June 7, 2018, at our school, we discussed with the Professor about the language of inscriptions on buildings in the public urban space of football hooligans. 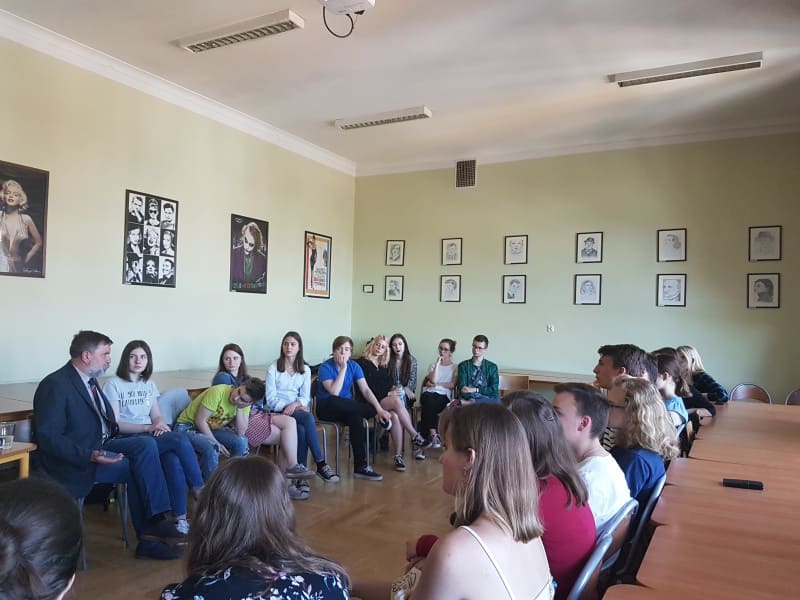 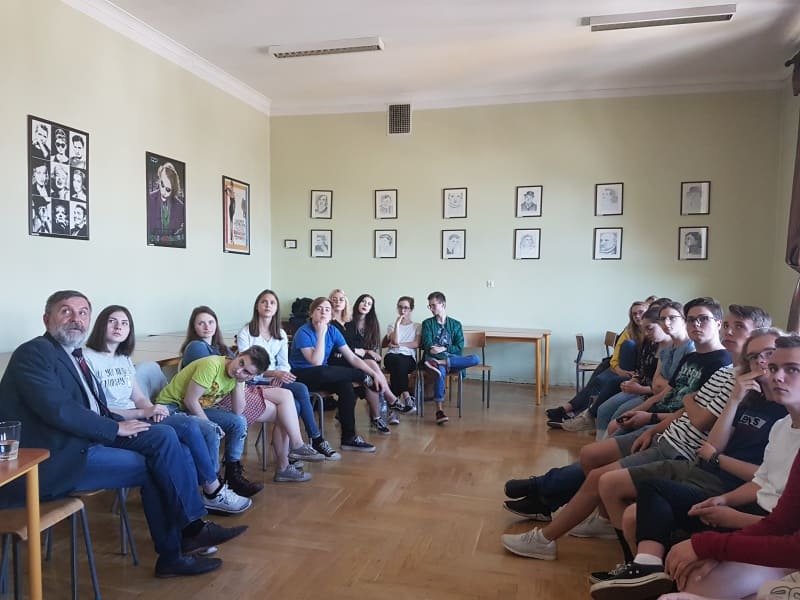 Task stalking, jogging and walking are a proposal for the last time in the pre-vacation period – physical education lessons for students in classes: 2a1, 2a2, 2h, 2c, 2e, 1a1, 1b, 2i, 2b. In addition to orientation in the field, solving hidden educational puzzles, motor tasks and physical activity in the open air, in the aura of W. Bednarski Park and Krakus Mound, it is a great opportunity to remind the safety rules for the upcoming holidays. WE RECOMMEND !!! 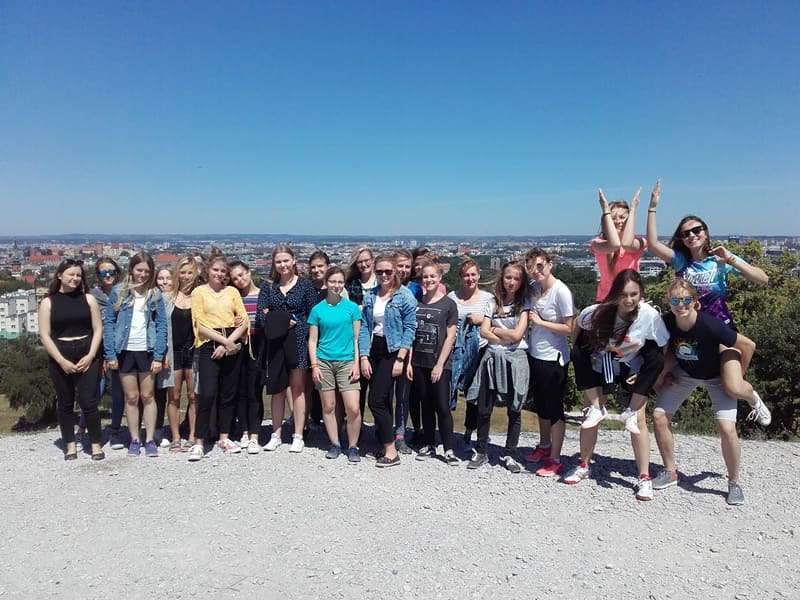 4th July with the participation of VI High School

With the participation of Ambassador Paul Jones and Consul General Walter Braunohler, we joyfully celebrated not only Independence Day USA in Fort Kleparz, but also the 100th anniversary of Polish-American diplomatic relations. There were also touching speeches, a traditional flag-shaped cake and accompanying artistic events. The only sad accent was the fact that for Consul General Walter Braunohler these were the last days in Poland… Thank you for everything! 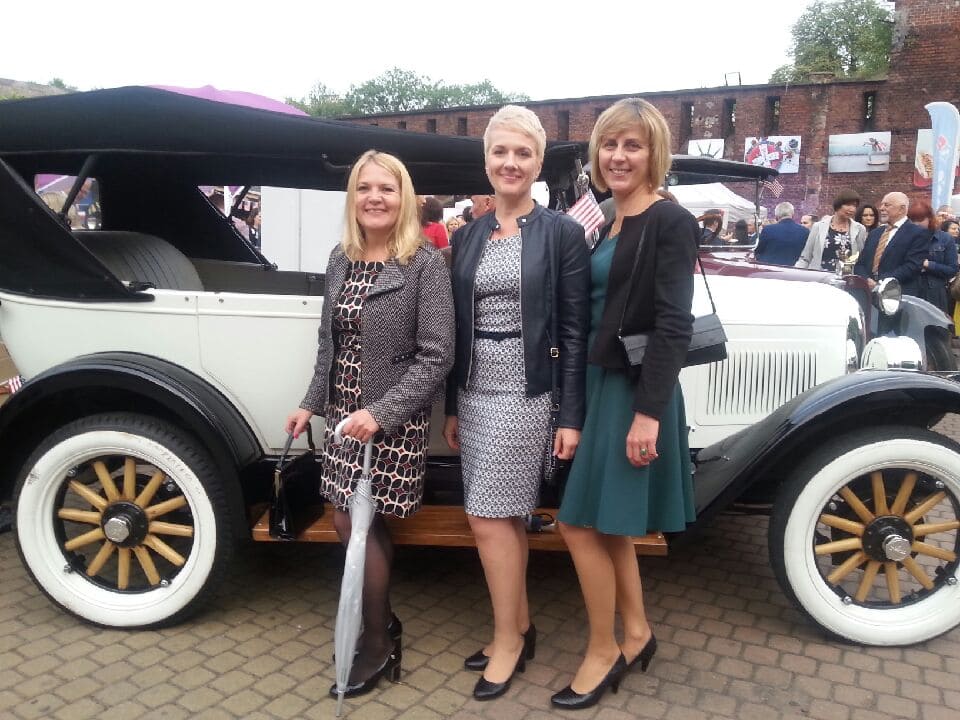 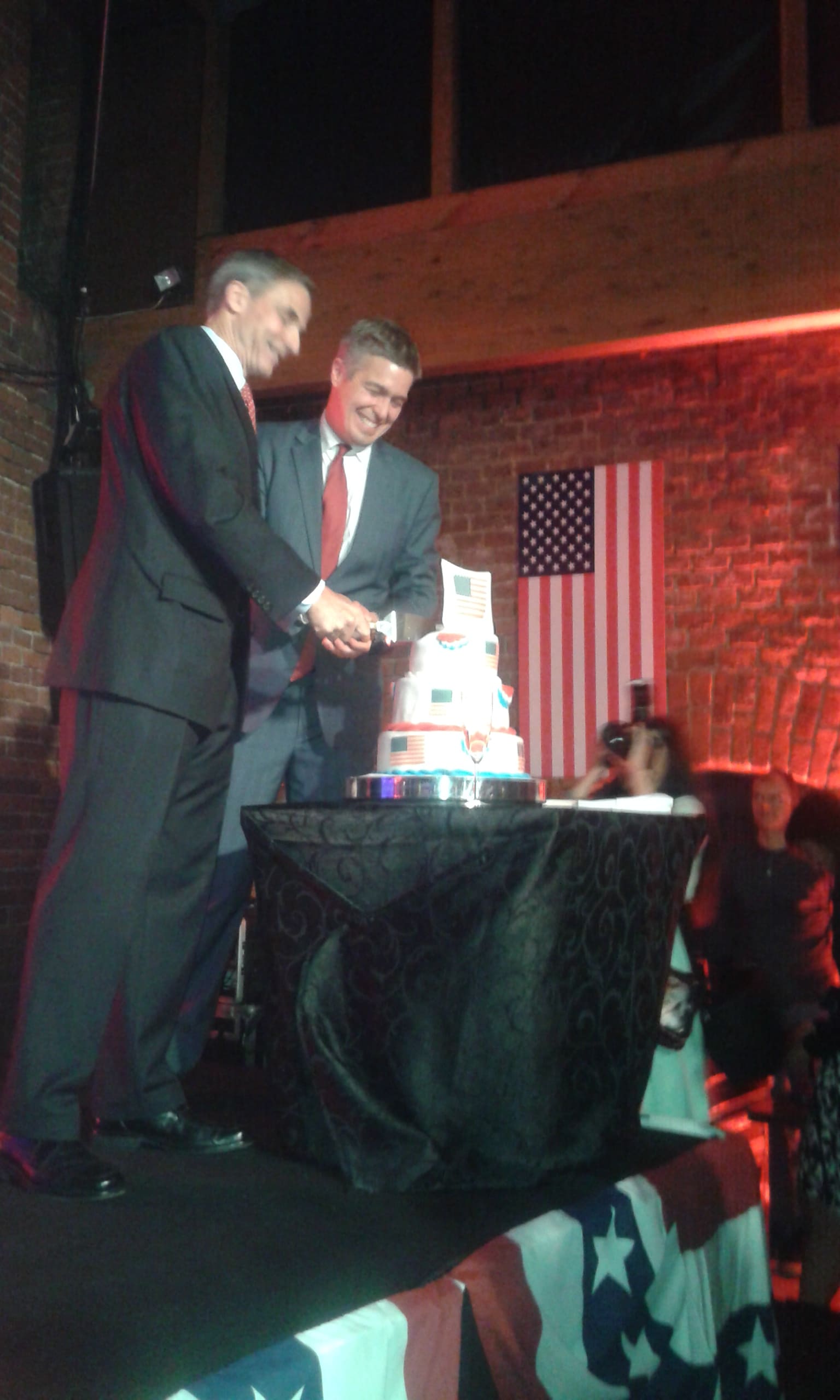