On 26.01. – 02/02/2019 a group of VILO students together with the Director and Professor Kowalski took part in an international exchange with a school in Israel.

For four days, we enjoyed the hospitality of students from the school in Binyamin, thereby strengthening Polish-Jewish ties. During our stay in Israel, we had the opportunity to see beautiful cities, including: Jerusalem, the city of many religions, Bethlehem – the birthplace of Jesus or Tel-Aviv, the cultural capital of Israel, as well as monuments dating back to the beginnings of Christian civilization, including the temple in Magdala from the time of Jesus , the ruins of Herod’s Castle in Masada and the Wailing Wall, which is the remains of the Temple of Solomon.

An interesting point on the agenda was the Yad Vashem Holocaust Remembrance Institute. In the huge and well-equipped museum, we could learn more about the fate of Jews during World War II, and listen to the stories of witnesses of these events.

After saying goodbye to our Israeli colleagues, we set off for Bethlehem, where we spent the next three days. The city is located in Palestine, so during the trip we had the opportunity to get to know two completely separate cultures – Arab and Jewish, of which an important element was trying local dishes, e.g. fish St. Peter in Tiberias or drunk with humus as an appetizer to every dish.

The trip enriched us culturally and allowed us to start international friendships that will surely bear fruit in the future.

On February 11 – 18, 2017, together with students from the VII Private High School named after Mikołaj Rej under the supervision of prof. Paweł Rogala, we went to Israel for a tourist and integration trip.

We spent the first three days in Benjamin staying with Israeli families. We took part in school workshops on interpersonal communication, listening skills, and sensitivity to other people. Then we went on a trip to Tel-Aviv, looking for traces of the Bauhaus, and in Jaffa – the ancient part of the city, we met at the Shimon Peres House of Peace with people who deal with Israeli-Palestinian dialogue. On the next day, we set off on an expedition to beautiful caves in the north of Israel near the Lebanon border, and then to Galilee, where we visited many places related to the activities of Jesus and took a boat trip on Lake Gennesaret.

On February 15, we regretfully left the hospitable Benjamin. Continuing our journey, we went to Jerusalem. The first point was visiting Yad Vashem – the Holocaust museum. We also had a very interesting workshop there, “Jewish Street”, learning a lot about the pre-war situation of Jews in Poland, then we found the names of several Righteous Among the Nations in the Yad Vashem garden and read their merits. It was a day full of reflection and reflection.
Jerusalem surprised us with cold and rain. We started our tour from the Mount of Olives through the Way of the Cross to the Church of the Holy Sepulcher. On the way, looking at lots of interesting, ancient places, we reached the Jewish Quarter and the Wailing Wall through the maze of streets.

On Friday we set off on another trip – this time to the Judean Desert to visit the fortress and the ruins of Herod’s Palace in Masada. In Qumran – we visited the site where the scrolls of the Holy Bible were found. in the caves there. We ended the day with a stay at the Dead Sea where we managed to do the so-called “Floating” in the extremely salty waters of the Dead Sea. The girls took care of the mud masks, which are equally great for the skin.
On Saturday we managed to spend more than two hours in Jerusalem before departure. This time the weather was fine. Jerusalem bade us farewell with sunshine….
Next year in Jerusalem …… Shalom! 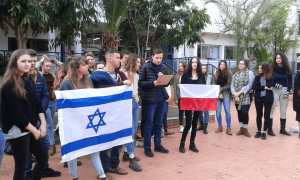 Welcome to the Benjamin school and the customary exchange of flags.

Meeting with the management of the Benjamin school. First from the left, the Headmaster of the School, Mr. Asher Motzny.

Integration workshops at the school in Benjamin. 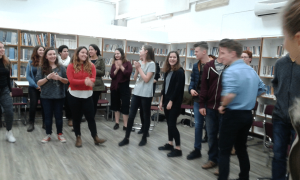 Playing in “musical chairs” in the yard during the break – we played together. 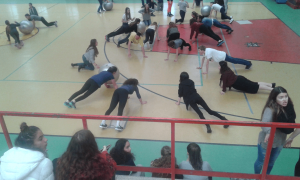 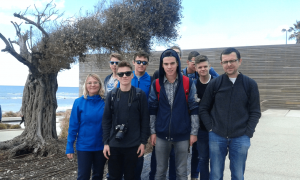 Visiting the caves in Roch Haniqra on the border with Lebanon. 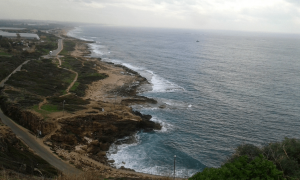 Our six from VI on a cruise on Lake Gennesaret. From the left: Karol Augustyniak 2a1, prof. Ewa Lubińska, Zuzanna Kubal 1d, Katarzyna Ciepły1b, Iga Fasińska 1b, Barbara Boba 2b. 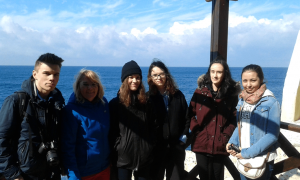 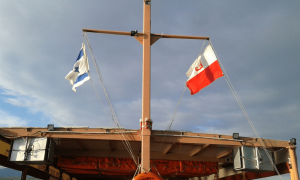 The waters of the Sea of Galilee are calm on this day. 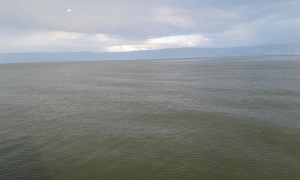 Plaque with the names of Poles – Righteous Among the Nations at Yad Vashem in Jerusalem.

I am sitting at the Jaffa Gate in Jerusalem. Between the Armenian and Christian district.

Jerusalem, surrounded by a wall by Suleiman the Magnificent, with eight gates leading to it, builds its balance by dividing into Jewish, Christian, Armenian and Muslim.

I watch the crowd flowing by, drinking black tea with fresh mint leaves. That’s how they serve it here. An old Arab in kefiya (called by us arafatka) attracts the eye, religious Jews celebrate the Sabbath, priests rustle with cassocks, tourists look for souvenirs and good shots, a local seller pushes a small trike with supplies, a group of pilgrims in identical hats comes, the baker carries a huge tray on his head with sesame pretzels. Confessions and habits of nuns are mixed up.

The famous Israeli poet Yehuda Amikai used to sit in this place. In the poem “Turyści” he complained that thousands of years of the city’s history are obscured by the current life:

Once I was sitting on the steps outside the gate of David’s keep, both of them
I put the heavy bags next to me. There was a group of tourists there
around the guide and served them as a landmark. “You see
the man with the bags? It’s a little to the right of his head
arch from the Roman period. A little to the right of his head. But
has shifted! Shifted! I said to myself:
Liberation will come if they are told:
See that arch from the Roman period over there?
Never mind, next to him, a little to the left, below, he’s sitting
the man who bought vegetables and fruit for his home “

And in another poem he said that in the holy city of Jews, Christians and Muslims “the air is saturated with prayers and dreams like smog”. It cannot be otherwise, after all, the present Jerusalem, plundered and torn down, and rebuilt again lies on seventeen layers of ruins. This is what our guide explains. I wonder how many lives are hidden in this peculiar cemetery where the present city grew up. Although in spite of it, almost in the city center, in the basilica under the gray dome, not the most recognizable and the most splendid one – because it is made of gold, there is an “empty tomb”. The tomb of the One who, as his disciples made known throughout the world, is risen. For us Christians, it is a hope that, in a sense, illuminates the city.

Jerusalem shines in the sun with beige sandstone and the mosque of the Dome of the Rock, and in the evening it glistens with lights that light up here and there on its wide, gentle hills, like a woman lying down to sleep. And so continues the fragile harmony of the city between Muslims, Jews and Christians.

Photos from the visit to Israel – February 2013 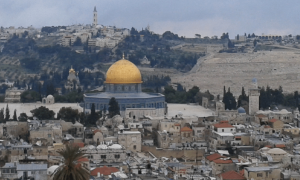 On September 4, a group of 170 students and teachers from Benjamin, Israel, visited our school. After being greeted by the management, the students went to the classrooms, where their Polish peers were waiting for them. During two lesson hours, students got to know each other, exchanged views and experiences. As our students emphasized, the Israelis were very open and friendly towards Poles.

Then, enjoying the hospitality of the priest of the Corpus Christi parish, we went to the monastery playground. There we played a Poland-Israel football match. After the draw result 1-1, there was a series of penalties in which we unfortunately lost. After the match, we taught Israelis to dance the Polonaise, and Polish students had the opportunity to learn about Israeli dances. Both our students and guests had a good time on that sunny day.

I would like to thank the Management, English teachers, professor Marcin Sokalski, and PE teachers for their help in organizing and conducting this meeting.

We are counting on a visit to Israel.

Visit of students from Beit Berl College from Israel – March 11, 2014.

On Tuesday, March 11, 2014, we had the pleasure of hosting a group of students and academic teachers from Beit Berl College in Israel. It was a unique opportunity to introduce our countries to each other, tell about the places we live and discuss history and the present. The visit ended with students from class 1A2 showing the guests around the school.

Meeting with Israeli youth from the Benjamin school – August 30, 2013

August 30, 2013. On the last Friday of summer holidays, we hosted over a hundred students from the Benjamin school in Israel at our high school. Students had the opportunity to meet in smaller groups, get to know each other and talk in a relaxed atmosphere about school and everyday life, as well as about stereotypes about our two countries. The meetings were attended by Israeli teachers and English teachers from our school who moderated the discussions. In the second part of the visit, thanks to the invaluable help of physical education teachers, all students took part in dance workshops during which they learned polonaise.

The August meeting was held as part of our international cooperation with a secondary school in Benjamin, Israel, and was prepared by prof. Artur Kowalski. This school year, just like last year, is planned to visit our high school students in Israel.

A visit of Israeli youth from Benjamin to High School No. 6

The purpose of this meeting was to get to know each other, raise the subject of the Holocaust of Jews during World War II and spend time together talking, playing and visiting Krakow. This was to be achieved through workshops devoted to Miłosz’s poem “Campo di Fiori”, Polish and Jewish dance lessons, a basketball match and meetings on the Krakow Market Square.

For the Israeli youth it was an opportunity to break away from the subject of the Holocaust that dominated their trip to Poland for a while. This meeting took place after their visit to Majdanek, and before Auschwitz, the Warsaw ghetto and Treblinka. They could confront their ideas about Poles, often presented in a negative light, with living people, their peers who did not differ much from each other.

For the Polish youth, the meeting with the Israelis was very exciting. Despite some concerns, the young people quickly found a “common language” when talking about very serious and less serious matters. When asked about their impressions after the meeting, they often spoke of the openness and friendly attitude of their peers from Israel, and made contacts with them, some of which will hopefully survive the test of time.

The Israeli students and teachers also expressed a very positive opinion about the meeting, inviting us to Benjamin.

I would like to thank the management of our school for making this meeting possible, a great help in organizing the visit by changing the lesson plan and turning off the third floor, professor Marcin Sokalski for help in preparing the sound system in the hall and in the gym, professor Marcin Skoczeni for preparing the Polonaise lessons and organizing basketball game. I would also like to emphasize the role of Mrs. Katarzyna Płazy, Mrs. Ewa Lubińska, Mr. Marcin Muszka, Mr. Przemysław Kasprzyk and Mr. Wojciech Rak in conducting the workshops and moderating the meeting in the classes.

Judging by the reactions of our students, Israeli students and teachers, it can be said that this meeting allowed us to break stereotypes and prejudices and establish mutual contacts.