Congratulations on qualifying for District 43 OJN

Beloved Vilowicze,
thank you very much for participating in the Great Orchestra of Christmas Charity lottery. Thank you to all wonderful people for the gifts that you have given. I would especially like to thank the students involved in volunteering and organizational assistance.

New items in the library – we invite you to borrow it

The school library invites you to borrow new items!

Final of the action 3 MINUTES – help not only from Christmas ..

On behalf of Emilia Teper from class 2c, the Student Council would like to thank the whole community of High School No. 6 for joining the 3 MINUTES – Gift of the heart for Ms. Iza.

It was a spontaneous and short action … a collection of gifts for a mother with four children. The action exceeded our wildest expectations !!! Once again, VILO has shown its care, heart and sensitivity to those in need … because we remember that:

“By helping others you help yourself …”

And Mrs. Iza was really touched by the amount of gifts and presents.

THANK YOU to all the donors, and congratulations to Emilia for the idea, professionalism and great empathy! 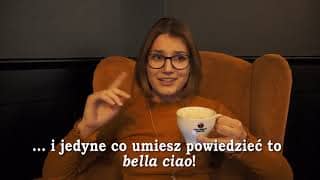 January 20 was a special day for Italian language enthusiasts in our school. On that day, young enthusiasts of sunny Italy culture gathered in the school hall to celebrate the “Day of Italian Culture and Language”, organized by Magdalena Osocha, MA and Katarzyna Borejczuk, MA.

As in previous years, a great guest honored us with his presence. This year it was Dr. Alicja Paleta from the Jagiellonian University. In her lecture “Theater made in Italy, or meeting with opera”, she introduced us to the history of musical theater and its greatest creators. We also had the opportunity to listen to the most famous pieces of Italian composers.

After the lecture, it is time to show the films promoting the learning of the Italian language created by the students. With the votes of the participants, the 1st place was taken by Maja Jurczyńska (2a1) and Julia Dudek (2g1), and the 2nd place belonged to Hubert Kuboń (2d) and Bartłomiej Kura (2d).

Then we had the opportunity to play a game popular in Italy – Tombola at family gatherings. This entertainment tested our knowledge of Italian numerals, but also our concentration. Luck this time was Aleksandra Janik (2f).

There was also a musical performance. Wiktoria Ciępka (1Gp) gave us her talent, who played the song “O sole mio” on the cello. Victoria’s concert made our delicious meal pleasant. It is not difficult to guess that it was Italian food, specifically cartocciata catanese from the city of Catania in Sicily.

The last item on the agenda was the Knowledge Quiz about Italy. There were questions about language, history, geography, culture and traditions of the country. In this competition, Julia Szczurek (3f), Olga Kałuzińska (3f) and Oliwia Sochacka (1Fp) took 2nd place, while the honorable 1st place went to Aleksandra Janik (2f), Alicja Dubiel (2a3) and Julia Kisiel (2a2).

After many exciting attractions, it’s time to end the meeting. The prizes for the winners and the performers were presented by the deputy headmaster of the high school, Iwona Fedan. After the ceremonial speech by Mrs. Deputy Director, the holiday unfortunately ended. Nevertheless, positive and warm memories like sunny Italy will stay with us for a long time.

On January 23, 2020, the school stage of the 13th edition of the Beautiful Reading Competition took place in the school library.

The following pass to the provincial stage:

1. Ignacy Peczkis (Sławomir Mrożek I want to be a horse)

Congratulations to all participants. 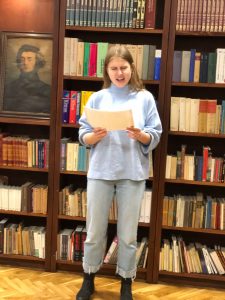 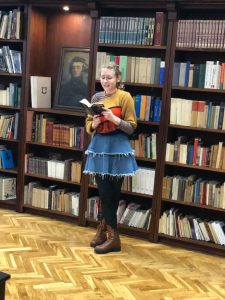 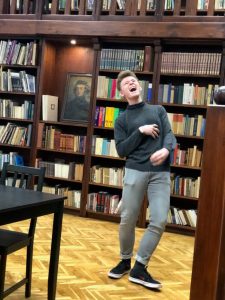 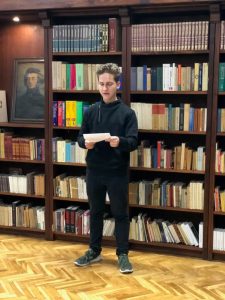 Congratulations on qualifying for the XLIII OJF Central Stage

Celebrations of the 75th anniversary of the liberation of Auschwitz-Birkenau

January 27 this year was a special date. The 75th anniversary of the liberation of the Nazi Auschwitz-Birkenau camp was celebrated around the world. The words spoken in Oświęcim by the former prisoner of the camp, Marian Turski, who called on young people not to be indifferent, echoed deeply, because “Auschwitz did not fall from heaven.”

Our students once again showed remarkable maturity and sensitivity by participating in two meetings with witnesses of those events, organized as part of the Krakow celebration of the anniversary of the liberation of Auschwitz-Birkenau.

On Monday, January 20, a group of students took part in a meeting with Ms Zofia Radzikowska, a Jewish woman who avoided the Holocaust by hiding in villages near Krakow. The meeting took place at the Auditorium Maximum of the Jagiellonian University, and the All in UJ association and JCC Kraków were responsible for its organization.

On Friday, January 24, in a slightly changed composition, our students met with Lidia Maksymowicz, a former prisoner of the Auschwitz-Birkenau camp, a victim of pseudo-medical experiments carried out in the Auschwitz camp. The evening meeting took place at the Galicia Jewish Museum.

During both meetings, the students could listen to these difficult stories, ask their own questions or just talk to people who survived World War II. At the end of the Friday meeting, Mrs. Lidia Maksymowicz thanked everyone for their presence, especially glad to see so many young people. Like other witnesses to history, Lidia believes that the future of this world is in young hands.

Congratulations on qualifying for the OWOBIO Central Stage

Congratulations on qualifying for the Central Stage XXXIII OWE

Congratulations on qualifying for Stage 2 of the 3rd OOP

The national volleyball team took 5th place in this year’s edition of the high school tournament played as part of the Krakow Youth Olympics. Taking into account the fact that 28 teams took part in this year’s tournament, the 5th place should be considered in terms of success.

The volleyball players of the 6th High School have been occupying a leading place in this competition for years, proving once again that they belong to the top teams in Krakow.

Congratulations and we wish you continued success.

On February 8-9, 2020, Jakub Kostrz from class 3f and Timea Horvath from class 2a2 took part in the 2nd stage of the XLVI Geographic Olympiad.

Congratulations on qualifying for the 43 OJN Final

Congratulations to class 1Cp student Anna Schwarz for qualifying for the finals of the 43rd German Language Olympiad.
We keep our fingers crossed for the best results in the final stage!

The participants were judged by a jury composed of: Bogdan Micek, Dorota Kaczor and Gabriela Dec.

The final auditions will be held on February 24, 2020 at the Podgórze Culture Center.

We keep our fingers crossed!

Summary of the Vilentynka campaign in High School no

14.02. In 2020, we completed the Vilentynnes campaign in our school. It enjoyed great interest. It definitely exceeded all our – the VILO Student Council – expectations. Among the standard Valentine’s Day cards – hearts provided by the local government, you could also find cards made by students, stuffed animals and even a goldfish !!

The Valentine’s Day Committee, led by Nicola Śliwińska and Julia Petrow, would like to thank the whole community of High School no. Thanks to your Valentine’s Day, PLN 840 was donated to the disabled.

Thank you for your big hearts!

Aleksander Szewczyk took third place in the final of the 17th Krakow Recitation Competition in the secondary school category.

The participants were judged by a jury composed of: Anna Kukawska, Magdalena Fudała, Weronika Bis.

The ceremonial ending and awarding of the awards of the 17th Krakow Recitation Competition took place on March 2, 2020 at 11.00 at the Podgórze Cultural Center.

The Student Project – voting by VILO students – the topic was won in the poll: 80/90 day

On February 28, for the first time, our school will host a thematic day, selected by voting for the best student project. Students will dress up as celebrities and ordinary people of the 1980s and 1990s. Throughout the day, we will be able to hear the greatest musical hits of those years (around the gym hall from 9:15), watch the film under the supervision of prof. Izabela Żelazna in the auditorium (13:35 – 15:05) or take part in the competition for the best outfit. We cordially invite you to participate, because the winner will receive a special award from members of the VILO Self-Government.

We hope that Friday’s attractions will make their stay at school more pleasant and will make students learn how much power they have when it comes to school activities.

We will see you this Friday, and also for the vote for the best student project on March 4!

Minister of Democracy and Information

Below are the results of the vote:

All the above-mentioned projects, apart from the winning proposal, will appear in the next vote.

who qualified for the final stage of the 44th Olympiad in English.

Literary competition “For a green pen” – congratulations to the winners

Literary competition “For a green pen” organized by the Youth House of Culture. K.I. Gałczyński in Krakow

Congratulations to Aleksandra Smus for taking second place and a statuette, as well as to Julian Madej, who won the award. They are both awarded 2a1 students; Grażyna Fallowa was the guardian of literary works.

Here are the highlighted poems inspired by the works of Konstanty Ildefons Gałczyński:

unexpected deviations from the route

so that in the eyes admired for centuries

penetrating with heat a shapely body.

I stood and watched

together with the crowd of onlookers.

We watched without a word

monumental feast of tongues of fire.

As if wanting to prolong your torment.

The fire has never been so loud.

I was always told a woman

I even heard that it causes similar delight

But would anybody think

that it can be just as fragile?

YOU SAID YOU LOVE ME

You said you love me day and night

but with whom do you spend hours of my solitude?

Where are you when I cry with the stars?

I miss our closeness so much.

The silence of our conversations is my cry for help.

I am slowly going crazy from being silent.

The dull pain, betrayal, and powerlessness are long gone.

I have no words to express this emptiness.

Where has your love gone? Who did you give it to?

how I feel sorry for us … you gave up so quickly.

You said you love me regardless of the season

but our conversations are as cold as January mornings.

You said you love me without exception

but you’re running away from me by calling me a junkie.

You say I burn your eyes that you can see hell in them;

my heart has long since broken, mirror shattered.

You can’t even look at me

your eyesight is absent, desire blurred in it.

You said all this to leave me alone

with unlimited love for you?

Why did you do that? You couldn’t turn me off right away?

You disappeared after showing the best drug – yourself.

You said you love me

why do you quit so quickly?

You said you love me

why don’t you try to save us?

Save us, please with tearful eyes.

Save this killer romance between us.

We had a great time!

Celebration of the Day of Remembrance of the Cursed Soldiers – March 1, 2020

On March 1, 2020, for the 10th time, the celebration of the Day of Remembrance of the Cursed Soldiers and all those murdered during the Soviet terror took place throughout Poland.

High School No. 6 proudly took part in the celebrations.

Big congratulations to the flagship of the 6th High School!

OLYMPIAD OF POLISH LITERATURE AND LANGUAGE