the boys have been actively and systematically taking part in SKS organized by coach Paweł Zgud for 3 years.

The hard work and effort paid off, because for the first time in many years, the school’s volleyball team won the Qualifiers in their group and qualified for the Finals!

As the winners of the group, they got the opportunity to take part in the Final with the best teams from Krakow upper secondary schools and they won it !!! Without losing a single match.

In this way, this year and the 2015/2016 school semester we entered the 1st League as the first of two teams !!! And we had to face twelve, so we couldn’t have dreamed of a better result!

In this way, in a year, we will participate in the games of Krakow high schools in the First Volleyball League!

On my behalf, I would like to thank the boys, players and also my students, whom I now want to mention:

They gave a really great example that with systematic work and effort put into the game and training, you can reach first place and Win!

I invite everyone willing to participate in SKS volleyball classes, which I am organizing, because in the new school year it will take even more work and effort to stay in the First League!

Congratulations to the team again !!!

In mid-April, several dozen students of two classes 1h1 and 1h2 flew to sunny Spain for exchange. During 7 amazing days we had the opportunity to feel what it is like to live in one of the biggest and most beautiful Spanish cities, Zaragoza. It was an unforgettable experience, every day was different, we visited the city, including the amazing Basilica del Pilar, a medieval Muslim palace and many museums. We took part in a city game during which we discovered the most interesting corners of Zaragoza together. One day, we went on a full-day trip to a wonderful, picturesque town in the mountains, where we visited a castle and an amazing canyon along the river with incredibly blue water and ended with a waterfall.

In the evenings and during the weekend, we had free time at our disposal, which everyone spent with their Spanish couple, going out, shopping, walking, getting to know the city’s nightlife. The weather, as befits Spain, perfect, 32 degrees and sun, thanks to which most of them returned to Poland nicely tanned.

All this time we got to know Spanish culture from a completely different angle, we tried typical dishes, got used to unusual habits such as sleeping in siesta or kissing heartily on the cheeks to greet us. Spending and talking to host families and their friends, we saw what life looks like in there, and we proved to ourselves that we can really communicate in Spanish without any problems.

All our guests turned out to be very nice, very hospitable and open, so we got very close in this short time and when it came to saying goodbye it was hard, because we met really fantastic new people and experienced things together that we will remember for a long time. Now we are looking forward to the arrival of our Spanish friends to Krakow.

AWARDED AT THE MAŁOPOLSKA ARTISTIC FESTIVAL OF YOUTH

We sincerely congratulate the students of our school who have received awards and distinctions in the Małopolska Youth Art Festival:

THE TRIUMPH OF SCHOOL THEATER !!!!

April 25 is the day of spectacular success of both theater groups of our school.

In the Youth Theater Presentations:

The ensembles presented their performances on the Pod Ratuszem Stage.

In the evening, we participated in the Gala of Laureates of the Małopolska Youth Art Festival at the Groteska Theater. And here we triumphed again!

On April 21, 2016, we celebrated Earth Day. We hosted two scientists at our school: Dr. Wiktoria Rojek from the Institute of Environmental Biology of the Jagiellonian University and prof. Roman Gula, an employee of the Museum and Institute of Zoology of the Polish Academy of Sciences in Warsaw, an outstanding scientist and expert who has been conducting research on the ecology of wolves in Poland for many years, as well as a researcher of exotic species in New Caledonia.

Dr. Wiktoria Rojek gave a lecture on the importance of bees in nature and human life. Mr. prof. Roman Gula unveiled the secret of the biology and ecology of wolves in Poland.

The lectures were followed by a poster competition promoting the protection of wild predatory animals in Poland: wolves, bears and lynxes, and a competition for the best herbarium.

Awarding the prizes in the Provincial Competition of Chemical Knowledge,

Faculty of Chemistry of the Jagiellonian University – April 23, 2016

On March 9, 2016, the National Chemistry Competition “Alchemist” was held, run by the Association for the Promotion of Knowledge and Regional Culture in Warsaw. As many as 46 students of our school took part in it.

We are pleased to announce that 21 of them were awarded in this Competition. Those are:

Moreover, Julia Musiał‘s result (the best in our school) turned out to be “very good” in the country.

The translator is a traitor, say the Italians. The next edition of the translation competition confirmed this maxim. Many daredevils attempted to translate the poetry of the British writer Charles Simic into Polish – but only a few of the translations were close to the original.

However, those who managed not only to faithfully translate the text, but also to convey the spirit of poetry in form and content, were Monika Kłosińska (distinction) and Maja Rakoczy (victory).

Congratulations and we invite you to the next translation battles.

Students of the bilingual section, who won the National School Competition for Spanish Theaters in March, this time presented themselves at the International Theater Festival in Prague on April 17-23, 2016 with the play “Difficult Ladies”. The director of the show, Nayra Ramirez Peñuela, together with a group of 8 students had the opportunity to take part in theater workshops and get to know the Czech capital. During the Festival, our students exchanged experiences with students of bilingual sections from other Central and Eastern European countries and had the opportunity to meet the Spanish Ambassador at a party organized in his residence.

As the only school, we were able to pre-premiere a museum dedicated to one of the iconic works of our patron, namely the Pan Tadeusz Museum in Wrocław. There are, among others original manuscript of “Pan Tadeusz”.

In addition, we also saw the Museum of Architecture, Centennial Hall, Panorama Racławicka, the famous Africarium and the Sky Tower viewing point.

Awarding the prizes in the Provincial Competition of Chemical Knowledge,
Faculty of Chemistry of the Jagiellonian University – April 23, 2016

On March 9, 2016, the National Chemistry Competition “Alchemist” was held, run by the Association for the Promotion of Knowledge and Regional Culture in Warsaw. As many as 46 students of our school took part in it.

We are very pleased that 21 of them were awarded in this Competition. Are to:

Moreover, Julia Musiał’s result (the best in our School) turned out to be “very good” in the country.

On June 6, 2016, a class 2G trip to Sandomierz and Baranów Sandomierski took place

Class 1d in the Garden of Experiences in Krakow.

It is best to learn the laws of physics in practice – class 1d in the Garden of Experiences in Krakow.

The program included a visit to the National Park, visiting the cave and admiring the karst phenomena taking place underground. The next two days in Prague were spent walking around the city. We were in Prague, where we visited the castle, the famous Golden Lane and one of the most beautiful cathedrals in Europe. We saw the “playing fountains” and the Lesser Town.

Despite the capricious weather, everyone was in a good mood and we can safely say that the trip was successful.

We thank the organizers and sponsors 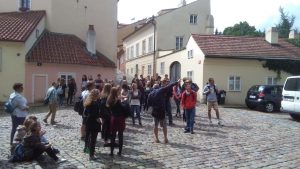 On June 16, the first edition of the intra-school nature competition entitled: Four faces of nature took place in our school. After a fierce and emotional competition of representatives of the first classes, the winner – class Ie was selected. Congratulations!

Grades 1a1 and 2b in the Botanical Garden

Congratulations on 100% passing the matura exams!